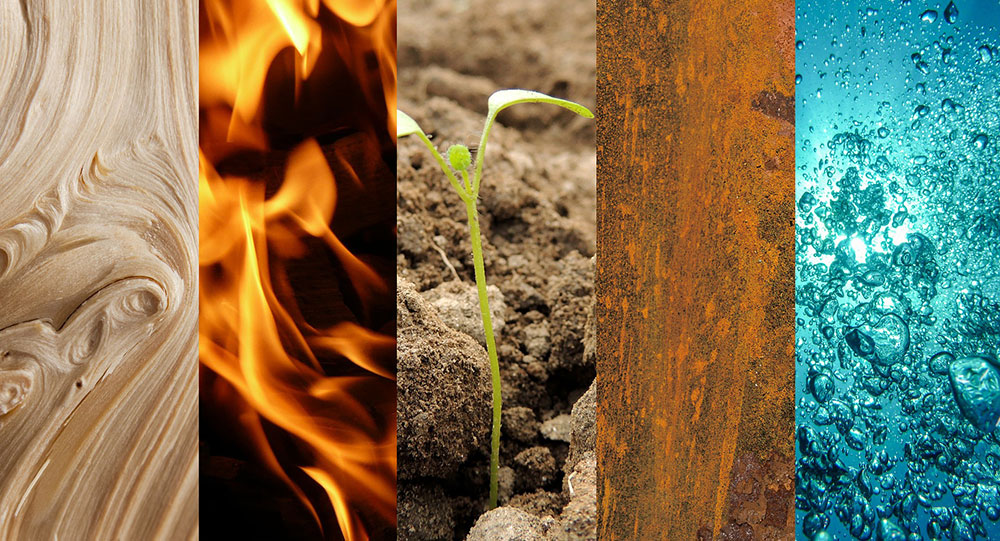 The concept of five elements is one of the fundamental principles in Chinese Qigong, but also in other areas of Ancient Chinese life, such as Medicine, Feng Shui or Geomancy, Astrology, Philosophy and Religion. It is one of the crucial things that you need to understand if you want to grasp the wisdom described in ancient texts.

Why is something like it is, why ancient Chinese did something as they did and often why they didn’t do it?

Answers on these and many more questions that might arise will be answered in this and many future articles that will follow.

There is YinYang in everything and from these two, or better said, from a pair of one – five elements are derived which are merely the same thing; so YinYang but with different quality, density, temperature, flexibility, fluidity, potency, regenerative ability, colour, sound, vibration, electrical conductivity and charge, more or less alive, etc.

We know now, from the above, that five elements derive from YinYang and now we can add that this Pair of One also cycles in the circle and moving as a spinning wheel. Once the Yang is in the upper position and other times the Yin is. Sometimes Yin and Yang are in equilibrium or placed horizontally… This we can describe easily with year cycles. In winter time Yin is on its peak, in the summer Yang is on its peak, in spring and in fall YinYang are supposed to be in equilibrium, but be careful, though!

Where is real equilibrium? When the season ends, last ten days, and in Indian summer time, maybe.

Why is all this important?

To understand further in depth the change of elemental energies and how they change in accordance with YinYang cycle.

The same way as seasons change the peaks of elements change, seasons of their strength and their weaknesses change.

We could easily describe all the things I am putting into words with simple diagrams, but stay with me for a while. Every season is also represented with its own element: spring is Wood, summer is Fire, fall is Metal and winter is Water.

And where is now the fifth element? Earth, is represented by Indian summer or every last part of each season.

Earth also represents the middle of the whole cycle or the torque on which the wheel of cycles spins. “Every time the cycle ends energy goes to the middle to be reborn and regenerated. Earth is the root of all of us and everything derives from it and ends in it/as it. Earth nourishes us. ” We are one with nature and we can’t escape from it, no matter how hard we try to live artificially.

Both diagrams show the same principle, only that one emphasizes that Earth is an Indian summer, the other that it is the ending of each season.

These five elements have many characteristics in nature, but we should go on with human, since that is the main thing that we humans are concerned with, by ourselves.

Five elements in human are represented with organs, tissues, emotions, sounds, parts of the body, etc. These are classified best by Traditional Chinese Medicine, which uses this knowledge to treat, diagnose and classify human body. This unique system has similarities with other Asian traditional medicines, but if a researcher is earnest it is obvious there are really two major traditions, that of China and that of India.

Between these two traditions there are many similarities and many differences. Don’t get me wrong, I respect other local traditions and acknowledge their uniqueness, but the major role in healing arts or medicine hold these two cultural spaces. And there is Himalaya between and Tibet, which just happen to get some from one and some from the other. Imagine what would happen if this region was flat like middle Europe. Would we have two, one or maybe many such medicinal traditions?

We are not here to answer that.

Both traditions use the system based on knowledge about five elements. Indians love Ether or Akasha, and Chinese love nature, so they decided to stay in the world of palpable nature, without going into non material world. But those who have some experience with Chinese tradition know that this is far from truth.  Chinese tradition goes far into the realm of non material, for start the major concern of this tradition is energy Qi which is definitely not material and even though you can compare it with our electricity model it is not just that!

Chinese decided to name their Five elements in accordance with obvious characteristics of natural phenomena and in that way explained the transmutation of energy Qi.

There is a cycle of five elements in which  transmute their form from one to another in accordance with laws of nature. This is how the energy flows in our body, this is how the day starts and ends, years pass… Behind is the system which can be described with numbers (numerology), geometric patterns etc.

In the diagram below you can see how five elements are arranged. Now you must know that the cycle which is Supportive cycle or productive has nourishing and healing effect on us.

Controlling cycle is when the extremes start to arise as contrast to productive cycle. 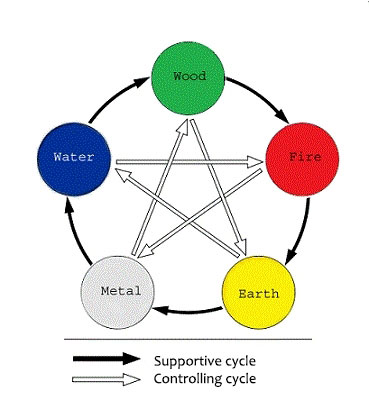 When we live in accordance with natural cycles in modesty and harmony we live in productive cycle. Elements support each other as mother or parent supports her child.

If we fall out of this primary harmony, one of our elemental energies may be drained or stuck frozen (water, metal), or may be excessive (fire, wood), or just weak and undernourished (earth), or maybe one or more of them don’t flow anymore like they used to, we use the principle of Control. We challenge our element with grandparent, which might take the energy from grandchild, which is the element with problem, but then feed the parent element which will again support a child element. What’s the controlling purpose of grandparent element? It is morale and ethics, wisdom and everything worth preserving. What is the most valuable thing worth preserving? Life, of course.

Life can only exist with constant change and flow of this energy Qi, which transmutes from one element to another, one density to another, one vibration to another and enliven us every moment of our existence.