After the Earth and Metal, the next element presented in this series about Five elements is Water element.

Water Element in the body

Water element in our body is represented by Kidneys and Bladder. Kidneys are Yin and Bladder is Yang. These are also meridians, which we name after the organs which they penetrate and are associated with. Kidney meridian runs in front of our body, bladder runs on our back (at least most of it). They support also the functions of Ren Mai and Du Mai, and Chong Mai extraordinary meridians.

Kidneys are often mentioned in the literature about Traditional Chinese Medicine as the source of life and the seat of Pre-birth Qi (called also Pre-heaven Qi, Yuan Qi, Primary Qi, Original Qi).

Kidneys store Essence, which in its Pre-birth form derives from parents and originates during conception. This Essence determines our constitution, that’s why our Kidneys supervise birth, growth, reproduction and development. Among other things Kidneys also produce Bone Marrow, fill Brain, govern Bones, oversee The Door of Life (Mingmen, Du-4 point) and second Fire.

In Kidneys resides will power

If Kidneys are healthy we are decisive, we decide without problems and we are goal-oriented. Lack of will power is oftentimes a cause for depression. They have also influence on short and long term memory.

Based on my experience we drain our Essence, Kidneys energy Qi with modern life based on will power and lack of tact and feeling. Instead we do everything with will, going even against our sense for right and wrong, thus draining our Essence.

Kidneys as foundation of YinYang for all the other organs

Kidneys as a cause for many things or everything

Kidneys represent the source energy which is the cause for our birth, our growth and procreation. Kidney Yang is the motive force of all physiological processes, Kidney Yin is material base for Kidney Yang. Kidney Yang represents physiological activity that transmutes Kidney Yin. When we are healthy there’s a unified field between them, but during sickness they might separate.

Kidneys as source of Fire

Even though Kidneys according to the theory of Five elements represent the element Water, they are because of their particularity and storing of Essence actually the source of Fire, second fire*.

(*According to the theory of Five Elements we recognize two Fires, first one resides in Heart and Small Intestine and the other resides in Pericardium and Triple Heater. First one Governs, the second is Ministerial.)

Essence or Jing is a substance, that in larger part we inherit from our parents and after the birth it is nourished and replenished by the food essence. This Essence (Jing) in reality represents our strength and vitality. In Men it is manifested as sperm production and in Women as production of ovum and menstrual blood. Kidneys store the essence from food that is transformed from the potency of inner organs. Essence circulates throughout the body, especially through Eight Extraordinary Meridians.** Essence controls different levels of life: birth, puberty, menopause and death. We would call this in our society and today’s language hormonal changes that happen in us humans cyclically, in women every seven years and in men every eight years.

(**Beside twelve pairs of primary meridians, that represent twelve organs, there are eight extraordinary meridians and their main two functions are building up the energy matrix and storage of Qi. In Qigong we use them primarily for conscious boost and build up of energy field and for healing. They are actually »Primary Meridians« as they evolutionary occur shortly after our conception and long before those connected with our organs 🙂.)

Kidney Yin is manifested through the acupuncture points GuanYan (Ren-4) and Kidney Yang through Mingmen (Du-4). Between them the Essence of Kidneys is located in its unified form. In Qigong, in this area resides Lower Dantien. Yes, Lower Dantien is connected with Kidneys, Essence as well, as with broader field and consciousness. If you connect points Ren-4 and Du-4, you start a flow of Essence through other meridians, because Du Mai and Ren Mai nourish all Yang and Yin meridians. These are two of Eight extraordinary meridians.

Bone marrow according to Chinese traditional medicine represents matrix for bones, physical bone marrow and spinal cord. Originally tissues such as bone marrow, brain and spinal cord represent the essence of food and drink that was transformed into fat, then into essence which then build up these tissues. Because of their influence on the brain, Kidneys are also associated with mental functions, mental clarity and intelligence in human.

Kidneys govern fluids in the body. If the Qi is balanced in the organ, then urinating is normal. If there a shortage of Yang, the doors (openings and passages in TCM) might be too opened, which causes frequent and light urine. However if there’s a shortage of Yin the doors might be too closed and cause seldom and dark urinating.

Control of absorption of Qi

To use the clean Qi from the air, Lungs and Kidneys work together. Lungs cause energy Qi to flow downwards and direct it that way towards Kidneys. Kidneys hold it, but if they can’t hold it, it will “rebel”, go back up again and cause stagnation in lungs and consequently breathlessness and asthma. This means that energy is “running” back to Middle Dantien between diaphragm and neck.

Kidney Essence feeds the ears, hearing and balance. When we are healthy we hear well. If the essence is damaged tinnitus might occur, partial or complete deafness and loss of balance.

Hair and scalp are dependent of kidneys Qi. If the kidneys are healthy, we have strong, healthy and shiny hair. When the quality of essence of kidneys starts to drop, hair might be thinning, falling out and turning grey.

All lower cavities, urethra, anus and vagina are controlled by kidneys. They also control bladder and its capability to retain water, but also spermatic ducts, ovaries and uterus.

Kidneys control the Door of Life or Mingmen

Mingmen is 4th acupoint on extraordinary meridian Du Mai that runs from coccyx, over the spine, over the skull, and ends up above our upper lip. This point and its function is connected with ignition, spark and fire or Yang energy, that derives from Essence – and is called Primary Yang. Specialty of this fire is that it can suppress water, but it can also create it. This fire differs from the fire of Heart and is connected with Triple Heater. That is why we have in the theory of Five elements two fires. One is Governing – Heart, the other is Ministerial – kidneys/triple heater. 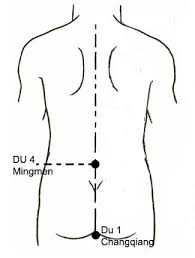 Both Mingmen as well as Primary Qi are connected with Kidneys and are mutually dependant. Primary Qi needs heat and this it gets from the Mingmen.

Primary Qi is a form of dynamically active Essence which has more than one function and one of them is supporting the production of blood.

Door of Life as source of physiological Fire

Door of Life or Mingmen is the source of physiological Fire of all organs, of spleen which is used for transformation and transportation of essences from food. That of Stomach for digestion, heart for preserving Mind, lungs for sending Qi downwards, liver for assuring enough energy, intestines to move nutrients and excrement, bladder to eliminate fluids and triple heater to transform and eliminate them. If the Fire from the Door of Life lowers, functional activity of every organ will worsen. Next comes fatigue, mental depression, lack of vitality, negativity and certain feeling of cold.

This fire warms up lower Triple heater or lower part of abdomen below the navel, and bladder. It warms up the Stomach and Spleen and helps digestion. It adjusts sexual functions and warms Essence and Uterus. It helps Kidneys with receiving energy Qi and to Heart with calming our Mind, as fire needs to lift up and support the function of heart, which is the seat of Mind/Spirit.

This is how the lack of Fire of Mingmen can cause the depression or lack of energy. Unbalanced Mingmen’s Fire can however cause pathological emotional problems with heart and therefore trouble our heart and mind.

Characteristics of Water and Kidneys

Smell connected with Water Element and Kidneys organ is rotting. If there is something wrong with kidneys the odour that spreads from a person is like something was rotting.

Colour of this element is black or dark blue. Lack of Yin or Yang will be visible as dark circles around the eyes.

The taste is salty. Sometimes a salty taste appears by itself when the Kidney Yang is on its peak. However when there’s lack of Kidney Yin something salty might be beneficial.

Climate is cold. Outer cold can affect kidneys. This is why during the winter when they are more sensible we need to protect them even more. Keep them warm and not letting the cold air come near them.

The healing sound for Kidneys is “Cuei” (Tsuei) and you pronounce it silently.

The fear as imbalance of Water element is the deepest fear connected with the origin of your being and very often you are not consciously aware of it. It is expressed as a desire to control events in your life before they control you. People with this imbalance might be scared of many little aspects of their daily life.

Kidneys with Mingmen Du-4 and GuanYan Ren-4 represent the area in which everyone can find his/her Lower Dantien. Lower Dantien is the energy center, where we transform and store energy. We also use it as gravitational center, center from which we build our movements in internal martial arts and Qigong. From this center we pump harmonious Qi and build our energy field. The same way as Kidney Yin and Yang mutually transform and feed on each other, in Qigong with nourishment and conscious leading of Qi to lower Dantien Earth Yin and Heavenly Yang transmute to neutral Qi. This area was called by ancient Taoists, inner alchemists also a stove or cauldron. Union of Fire and Water. It is the same principle only the consciousness is different, a little bit wider.