It has been quite some time since we share with you a new blog and a new video about Qigong topics every week. Recently we have made some mistakes and we have realized that we need vacation.  But only after the journey through the Five elements is finished. 🙂 🙂

The Course of the Small Intestine meridian

Small Intestine meridian is a Yang meridian of upper limbs. It begins in the proximity of outer nail edge of the little finger. It runs up the ulnar or outer side of the arm, over the elbow up to the elbow where it turns around on the back side running over scapula and continuing to the spine where it unites with Du Mai extraordinary meridian in the Du-14 point, between second and third thoracic vertebrae. From there meridian runs towards supraclavicular hollow where it unites with Stomach meridian in St-12 point.  From there the inner branch descends towards the heart and stomach and further towards the small intestine organ where it ends.

One collateral branch runs form supraclavicular hollow over the neck towards the face to outer edge of the eyes.  From there it turns towards backside and down to the ear where the superficial course of the meridian ends, in the SI-19 point.

One other collateral branch runs from SI-18 towards eye orbit and ends in the inner corner of the eye uniting with Bladder meridian in the point Bl-1 or Jingming. 🙂 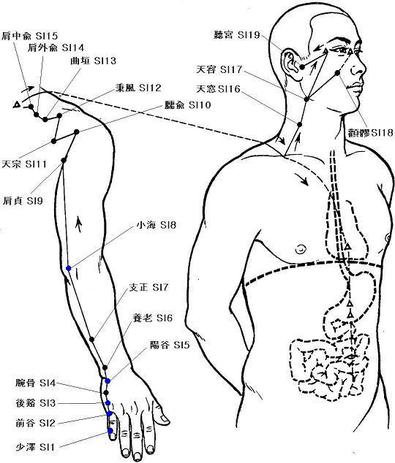 General indications are all digestive problems, ulcer in stomach or duodeum, coloenteritis or inflammation of the gut, bloating… Local pain and edema in neck area,  pain in facial area, pain in shoulder area with functional weakness. Pain and disfunctions along the meridian route. Redness of face, pharyngitis, tendency to psychosomathic illness, apathy, asthenia, agitation…

There are four points that I would like to mention, which are in my opinion very useful. 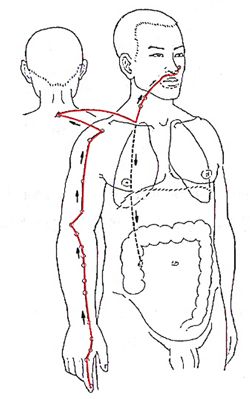 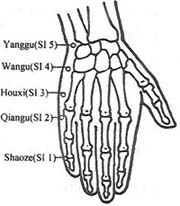 First one is SI-4 or Wangu, a source point of Small Intestine meridian. It is located in the outer edge of the palm in one valley between base of the fifth metacarpal bone and pyramidal bone. Indications are: rigid and painful fingers, palmar arthritis, headache, pain in the occipital area, tinnitus, general disfunctions of physical and psychological tonus, and others.

I found this point to be useful when, the energy of a person was a bit shut down and would need a bit of help to start the engine running :), combined with the next two points.

Next point is SI-8 or Xiaohai, which is He point of Small Intestine meridian. It is most easily located while the elbow is bent (see picture below…).

Indications are pains in little finger, pain in the elbow, pain in the area of scapula and back, edemas of neck, hearing problems….

But beside that it is useful for the situation described above. 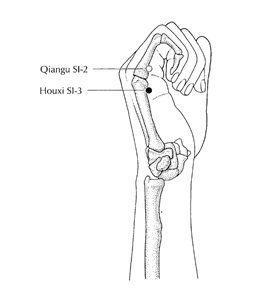 And last point SI-3 or Houxi, which is a Shu point and has many useful applications. It is an opening point for Du Mai extraordinary vessel or Governing vessel, and if the only thing that you know is that a person you treat have deficiency of Yang energy you won’t do anything wrong if you use this point in order to open and tonify Yang of the whole energy matrix. I discussed about this point in the video about extraordinary meridians. For more information about it go and check the video SMALL INTESTINE 3 (Houxi) and DU MAI Extraordinary Vessel.

Beside the Spleen, also Small Intestine separates fluids and essences of food and pure fluids from unpure ones. This function of Small Intestine is under supervision of Spleen.

Small Intestine  problems are associated with abdominal pain, which are accompanied with changes in digestion from constipation to diarrhoea, and flatulence. Sometimes urinary problems might appear such as burning urination, followed by sleeplessness.

Since Small Intestine receives, assimilates and filters all the information from all that we intake whether consciously or not. In accordance with this organ/meridian/function you then decide in a realm of another organ – Gallbladder – what to do! So, yes, the clarity is build upon a healthy Small Intestine. If it fails in this function, our Heart or Emperor will integrate wrong information into our psychological makeup. This information might develop some destructive habits, confusion or some other negative patterns or beliefs. 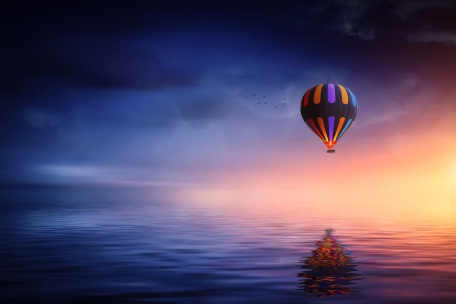 Common things about the Small Intestine

Because of its route and the nature of its energy, we can treat usual problems of shoulder area, neck pain, tinnitus and ear infections.

This is a today’s ending of my contribution to the society of lovely, cheerful explorers of energetic and vibrational reality!