A pair of Pericardium and Triple Heater are meridians that represent second Fire. What is really interesting to me is that this is the Fire that is more of non physical or »ethereal« nature :). First of all it is very unusual to our western mind, that there is “something” named a Concept of Five Elements and then there are Six… Hmm, could someone please explain this… was the first thing I almost shouted with amazement and of course with an absolute admiration of Chinese tradition of Energy Arts. This was quite some time ago. I am more grounded nowadays, but I still have this admiration and hopefully it will never end. It inspires me to explore further and deeper to understand somewhat more of the ancient wisdom and concepts. To connect our present understanding of reality with timelessness of nature.

I am deeply humble in front of all the Scholars, Medicine Women and Men who lived before us and who passed this knowledge I am writing about in my posts. I truly think they were servants of humanity in selfless profession, as We all should be at least in those terms of Hippocrates: …Shall protect life, shall do no harm … Do I live by these…. Do I speak truth… Am I sincere…? I am constantly asking myself, just to make sure I won’t do the wrong thing and harm. Do you have an ethical Codex, do you follow it, do you question it?

Positive side of our traditional approaches and methods towards health, those who are in healing profession, is that we are less able to do harm than those with allopathic or modern approaches. The methods that we use are less aggressive, more synergetic and whole (considering the wholeness of person).

But let’s go back to our YinYang pair of second Fire. 🙂 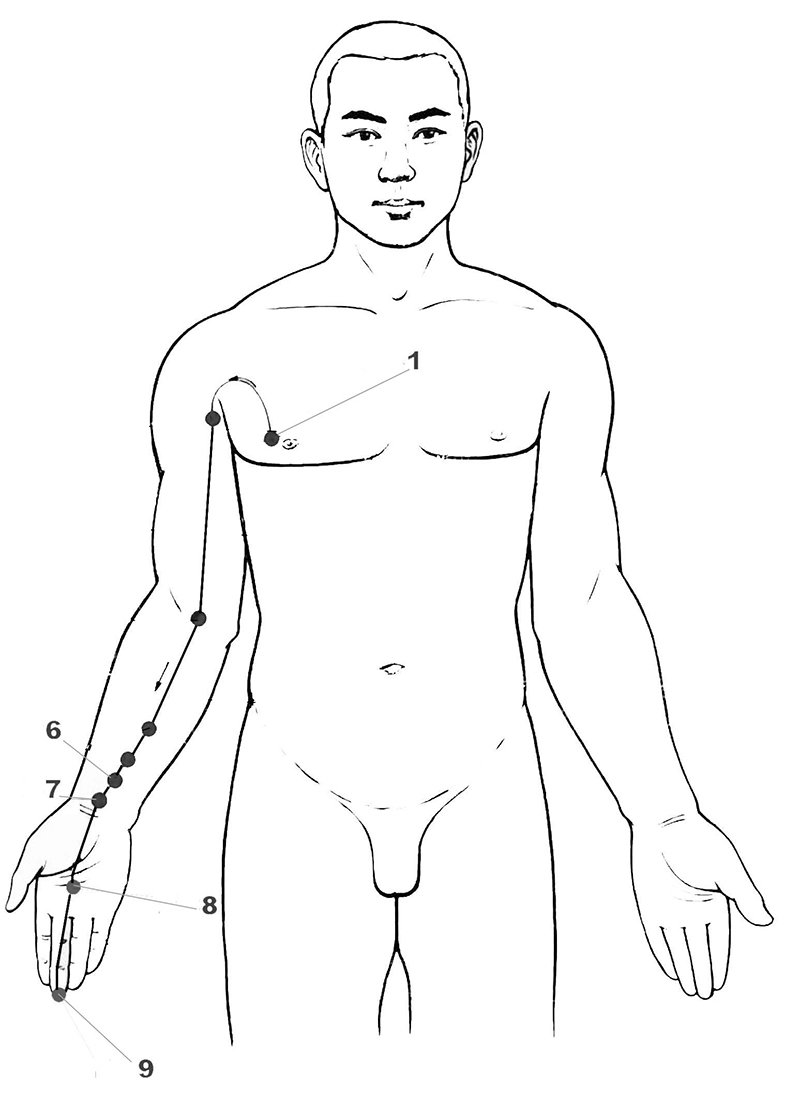 Pericardium is a Yin meridian of upper limbs. It begins in the chest in the area of Ren Mai 17, it descends thorough diaphragm, enters the abdomen where it connects with all three parts of Triple heater meridian. From pericardium organ inner branch runs through thorax and pierces to the surface in fourth intercostal space, from where it continues towards armpit. From there it continues on the inner side of arm towards middle finger where it ends. Collateral branch runs from middle of the palm Pc-8 point/Laogong to fourth finger where it unites with Triple Heater meridian.

Pericardium meridian is the protector of heart and its surrounding. Its main function is connected with arterial circulation. Energy of this meridian influences sexual glands with inner and outer secretion, this is why it is sometimes considered as »meridian of sexual functions.«

Indications for treating this meridian are all affections of arteries, contractions and pain of muscles in in the arms especially in the course of meridian, when the palms are too hot. Also in the cases of irritability, insomnia from sexual excitement, lack of sexual desire, impotency, sterility, frigidity.

I will mention two points that we have already discussed before, Pc-6 point which is an opening point of the Yin Wei Mai extraordinary vessel and Pc-8 point/Laogong which is a major energy gate located in the center of the palm and is used consciously in all serious energy healing work such as Qigong :). When these are opened, energy can flow. 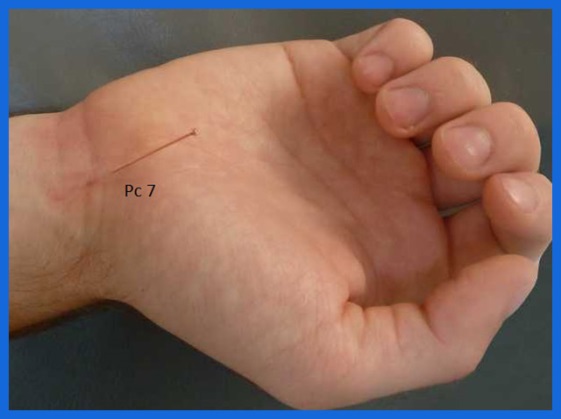 This is a Shu point, a source point and a point of dispersion of Pericardium meridian. It is located in the middle of the frontal wrinkle of wrist between two tendons. Indications for the use of this point are pain of precordium, palpitations, arrhythmia, hypertension, gastric problems, sexual tonus, fear, anxiety…

Very useful point besides the two points mentioned before.

Pericardium and its functions

Pericardium protects Heart, therefore it is named also Heart Protector. It governs for the Heart and is therefore also named Heart Governor. It communicates with source or with Dao which is in Wuji state and to be able to communicate with something you need to be like that, that is why pericardium is said »has a name but no form«, according to ancient texts.

Pericardium governs in the name of Heart therefore it governs over 12 meridians.

Triple Heater (or Triple Burner or Triple Warmer) Meridian is a Yang meridian of upper limbs. It begins on the outer edge of fourth finger and runs up on the dorsal side of palm. Then it runs up on the outer side of the arm towards the shoulder area where it crosses the Gallbladder meridian. From there it runs towards the supraclavicular valley where it enters the chest and unites with Pericardium. Then it runs through diaphragm, enters the abdomen where it comes in connection with all inner organs that it connects energetically.

General function of this meridian is warming. It stimulates vital functions, so it is responsible for the energy needed for absorption, assimilation and clearing of nutrients. Some authors have an opinion that through this meridian the sympathetic nerves can be influenced.

We will mention one point on Triple Heater meridian that we have discussed before. This point is TH-5 or Waiguan, which is an opening point of Yang Wei Mai extraordinary vessel. It is a very helpful, useful and overall healing point, check it out you won’t regret it. 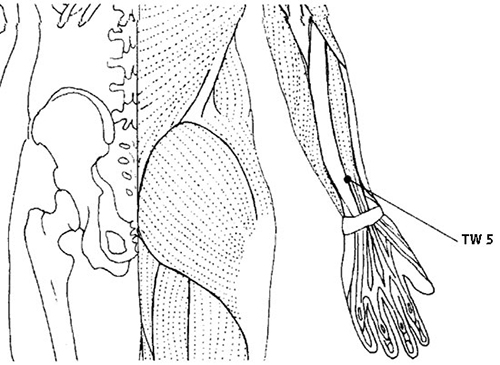 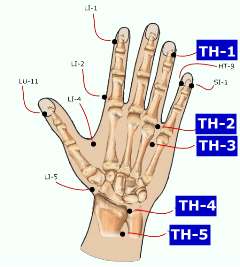 Next point is TH-3 point or Zhongzhu. This is a Shu point and a point of tonification for Triple Heater meridian. It is well known point for silencing the fear and anxiety. It is located on dorsal side of palm between the fourth and fifth metacarpal bone in one valley behind metacarpofalangeal joint.

Triple Heater and its functions

Triple Heater  meridian is a highway for the Original Qi and it works together with Mingmen of Kidneys to bring the ignition to every meridian through source point.

Three burning spaces of Triple Heater are Upper heater from neck to diaphragm, which heats up the air that we breathe in and deals with circulation. The Middle heater is where the stomach and spleen reside, and this region is responsible for transformation and digestive process. The Lower heater is responsible for expelling of unnecessary –  like waste of the body, and valuable – like semen in men and child/birth in women.

It is used for clearing Heat, Wind and obstruction, especially in the pathway of meridian.

We are not even a boundary, as we might think, of space, but boundless space limited only by our beliefs and our protective thoughts that support the matrix of system. The truth is beyond this matrix and these two meridians are the entrance to the realm of truth.

In this post I will propose one thing and this is the Sixth Element. Sixth element which is already known and classified as Second Fire. In the next post I will also name it Space and Ether (Aether) which are equivalent classifications of the same thing.

May the Qi be with You! Petar